Lighthouse Fisheries, the brainchild of a Mr. Louw, was one of the first fishery in South Africa to export live crayfish (rock lobster) to international markets, packed in containers, by air to Europe.

The fisheries buildings at Witsand, on the road from Kommetjie to Cape Point between the lighthouse and Camel Rock, consisted of tanks containing salt water and in which the crayfish were kept. The crayfish were caught by local fishermen using small rowing boats and crayfish traps. 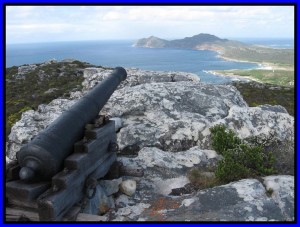 At the Cape Point section of the Table Mountain National Park – where the Cape Peninsula runs out into the southern ocean – there is evidence of Early Stone Age humans with stone tools in sandy deposits dated to 600 000 years ago, and yet more evidence of the tool-makings of Middle Stone Age humans 200 000 to 40 000 years ago.
Even more visible to visitors are midden and cave deposits with Late Stone Age shellfish meal remains, stone tools and bits of pottery and bone dating from 21 000 years ago to the arrival of the European explorers in the Fifteenth Century.
This photo shows an old Dutch cannon (found right here on the since-named Kanonkop in the early days of the First World War) which is thought to be the first in a signal chain to report ship arrivals in False Bay in the days of the Dutch East India Company rule – 1652-1795. It has been restored and mounted on an authentically built carriage, constructed to Dutch specifications.
Also just evident in the photo is the white Padraos of the Da Gama Monument (right, a quarter of the way down), marking the spot where Vasco Da Gama planted his padraos (cross) in 1497 for his king and country (the second coming of the Portuguese to this peninsula).

One Reply to “Lighthouse Fisheries (Witsand)”