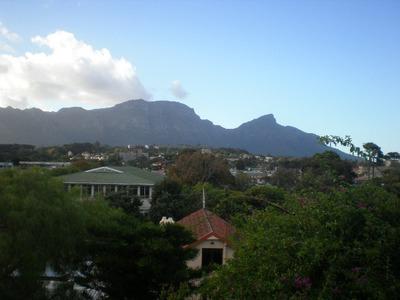 Miss Alida Ball talks to the editor of Ward Sixteen News and Views.

I am going to go back 65 years; remember these are childhood memories quite un-researched, and may be a little blurred by the passage of time.

Let us go back to 1924. Starting at Plumstead railway station, the centre of things at the time. There were only two railway lines and two platforms. One crossed from one to the other by way of a footbridge which was a large heavy red wood and iron structure. It stood more or less where the present subway between the platforms is today. The bookstall was already there, a wood and iron building presided over by Mr. Du Preez, an old soldier from the First World War. He had lost a hand in the war and it had been replaced by a large heavy iron hook which he found useful in holding down firmly piles of newspapers. His was one of the few shops in Plumstead. It was stocked with newspapers, magazines, sweets in large glass jars, small toys, pencils and school exercise books. We all loved the bookstall, and Mr. Du Preez and his sons Bertie were great friends of the neighbourhood children.

The steam trains were few and far between. Most trains turned around at Wynberg those days. For very many years the cost of train fares remained the same. To Wynberg – 4 pence for adults return, and 2 pence for children. To Cape Town it cost one shilling and three pence return for adults and nine pence for children. These were the fares and so they stayed through my young days; inflation had not yet reared its ugly head. The compartments in the coaches were all separated from each other, each with its own door, no passageway down the centre. One handed ones ticket to the ticket collector on the platform at the end of the journey.

At the end of the station was a level crossing. At Southfield Road there were booms operated from the signal box nearby. At Victoria Road there were large black wooded gates which almost always hung open – one took ones chance there.

I remember that part as being covered with coal laden trucks and shunting goods trains. On one tragic occasion I remember my mother coming home very distressed because she had seen a woman killed by one of the shunting trains.

Let’s leave the station now and go up Southfield Road towards the Main Road. Southfield Road was one of the very few made roads in Plumstead. It stretched from the Main Road as far as Woodgate Road and had a red gravel surface which was very often somewhat uneven and potholed. As one left the station one immediately saw on the right hand side a very large property known as Culmwood, bounded on its four sides by Southfield, Culm, Thornbury and Exeter Roads. My memory of this big plot is of pine covered land with a driveway up to a large Victorian homestead standing in the centre of the property. It was occupied by the Du Toit family. If I remember correctly he was a magistrate; there were two children. Amazing to think that a family of four lived on a piece of land now occupied by three blocks of flats each of about 48 units – some 144 dwellings!

As one reached the end of Culm Road one could see a couple of houses already built in that road. On the other side of Southfield Road the ground was wooded right up to Main Road. Almost at the corner of the main Road on the right hand side there was a small building which was a greengrocer shop run by the Rosenberg family. Today it still stands and houses a shoemaker and a bookshop. (These businesses have gone since this interview in February of 1989.)

Let’s look at the Main Road. This was tarred; and facing Wynberg, on the left hand side there was a picturesque little stream running merrily at the roadside right through Plumstead on to Diep River. On that side of the Main Road stood the little Plumstead Methodist church; a very attractive little building with its high sloping roof. One reached it by crossing a pretty rustic wooden bridge over the stream. The church property at that time extended right down to the Gabriel Road corner and along Brenda Road. 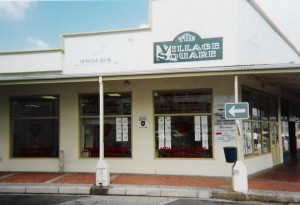 Opposite the church was one of the real shops of any size in Plumstead, Yulemans Store. The Yuleman family lived above the shop. There was a wooden balcony with iron railings above the shop. Even then the wooden floor bounced as one walked across it. In front of the old wooden counter stood large sacks of grain of various sorts. Behind the counter the shelves were stacked with everything one could imagine; groceries, crockery, dress materials; everything was there. One bought things by the pound, weighed on big scales, and packed into neat brown paper packets. On this side of the Main Road were one or two houses of the old Victorian type. Higher up towards Wynberg was the House of Bethany, now known as St Michael’s Children’s Home. The House of Bethany, now gone, was a gloomy looking building. It was an orphanage run by a sisterhood. That brings us up to what we called the Terminus, about where Wittebome now stands. There was no Wittebome or Steurhof station at that time. The Terminus marked the place where the trams reached the end of the rails from the City, and where they were turned around to go back again.

Opposite and on the same side as the Terminus was Barry’s Chemist. It was a real old Victorian chemist shop run by Mr. Barry, a well respected resident of Plumstead. Recently the interior of this shop was removed and taken to Gold Reef City in Johannesburg as a classic example of a chemist shop of its time. What a pity it was not preserved for the benefit of the local community. So we reach the end of Plumstead on that side. Remember that the buildings I have mentioned were the only buildings on the Main Road; the rest of the land was wooded.

Looking back towards Muizenberg, on the right hand side near Constantia Road corner was a boarding house called Oakdale. I believe it is here where Olive Schriener died. A bit further along towards Timour Hall Road stood a row of houses called Timour Hall Villas. These were largish homes, all identical with thick hedges in front.

Back at the Southfield Road intersection with the Main Road and looking towards Muizenberg there was little to see. A small Standard Bank building stood on the corner where the funeral parlor is now. On the opposite side of the Main Road were lovely weeping willows overhanging the stream. There were a couple of farm cottages at that spot; these were very much like the cottage used as the Fisherman’s Cottage restaurant (now Mambo’s Restaurant and Wine Bar). At this time Plumstead was changing from a rural area to a suburb. Old farms and smallholdings were carved up into building plots. In some cases smallholdings remained among the houses springing up.

When my father announced to his friends in 1924 that he had bought a property in Plumstead their reaction was “What! Are you going to live out there in the bundu?” My fathers reply was “I think Plumstead will one day be a very thriving suburb of Cape Town.”

Before we leave the Main Road let us take a look up Gabriel Road. Where Timour Hall Road crosses Gabriel Road was more or less the end of the inhabited area of Plumstead. I remember that the cottage where the flower sellers are was there at the time and opposite was a row of semi-detached cottages. At the mountainside corner of Gabriel Road and Timour Hall Roads there was a big old Victorian house called Cambridge. This was occupied by Mr. & Mrs. Johnson. Old Mrs. Johnson looked a little like the old Queen Mary, and she dressed very much the way Queen Mary did. Diagonally opposite from Cambridge was the Plumstead Primary School; a very much smaller building than the present Timour Hall Primary School.

Looking down Timour Hall Road towards the mountain one saw the Timour Hall dwelling at the end of the road. There were a few large dwellings on Timour Hall Road at that end. From Timour Hall Road looking towards Constantia Road there were no buildings. That was an area of white sand quite wild with grass tufts. Where Pick n Pay stands today were small sand hills with grassy tufts. Closer towards Constantia Road were some old farm cottages where coloured farm labourers lived. I remember our Methodist Church sending us out as groups of teenagers to hold Sunday School services among those sand dunes for the children of the coloured families living there. On the other side of Gabriel Road where the City Council Housing Estate is there was just waste land – white sand and grass. From here we will go back across the railway line and I will tell more about that area.
(From Ward Sixteen News and Views)