To complete our geography lesson on Plumstead lets start up at the station end of Victoria Road. Immediately in front of us on the right side was the Osman shop. They were an Indian family who lived on the premises at the back of the shop. They were a very well known popular family.

Canon Street branches off to the south and ran along the railway line with quite a few houses.
Next came Melville Road with its row of semi-detached houses at the beginning. Further along were one or two houses. At the end of Melville Road was a small farm that was owned by the Solomon family who lived there for many years. May, Jo, Avis, the twins Beth and Shirley and their brother Bokkie were among our childhood friends. 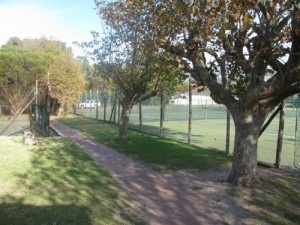 At the Princesvlei Victoria Roads intersection there was a rambling old house on that strangely shaped plot which was the home of the Hamel family. The great attraction was the tennis court. The Hamel family was a large one, there was Tom, Jack, May, Dolly, Molly, and Patsy, all of whom went on to become Western Province Junior Tennis Champions. Some of them went on to become Senior Champions as well.
On the opposite side were the sports grounds, a large area as we know it today. Then the buildings were small and primitive but cricket, bowls and tennis was happily played there. It was the centre of Plumstead social life.
Opposite, near Palatine Road, about where the Presbyterian Church now stands there was a nursery called Pages Nursery.

Going on down Victoria Road there was really nothing but the ‘coloured’ labourers cottages I have described earlier. Just before the railway crossing in Southfield there was a little row of shops on the north side. I remember these shops because one of them had been vacated and the Southfield Methodists held their church services in it. I well remember how strange it was to conduct a church service in a shop. Together with the Plumstead Cemetery there was little else in Victoria Road – it was just a large rural expanse. Here we end our Plumstead Geography lesson.

I have said earlier that life was a bit on the primitive side then. Let’s look at it.

Few of us had telephones, hardly anybody had motorcars; everywhere we went we either walked or took a train. There was no waterborne sewerage system. The loos were outside, usually on the back stoep of the houses. These loos were a refinement of the farm bucket type. Ours consisted of an angular wooden box with a high wooden back which housed a metal bin which contained ash and cinders. When the chain was pulled a measure of ash and cinders was decanted into the bucket. A firm called Ditchfield sent round large lorries by night to collect the buckets through the wooden hatchway in the rear of the loo building.

I well remember the excitement when the waterborne system was introduced. Our house had a big question mark over it. Apparently we were at the lowest point in Palatine Road and at first it was thought we would have to wait for an extension of the system before we could be connected. However we were among the first lucky people to receive this exciting new loo system. What a difference it made to life in Plumstead.

For shopping we had Yudelman’s shop, Osmans shop and the bookstall on Plumstead station. There was one other shop; it was just off Victoria Road in Trentham Road. This shop was run by Mr. & Mrs. Perrin. They were a friendly couple and their shop was typical of the faraway country dorps’ Algemene Handelaars. They had everything in stock; sacks of meal, mealies, and beans on the floor, groceries on shelves behind the counter, dress material and knitting wool on the other side. The shop was a plain rectangular building which I believe was once a barn or shed on the farm there.

One bought in one of two ways; for cash or ‘on the book’. ‘The Book’ was a small shiny covered note book with ruled lines and cash columns. Mrs. Perrin would enter by hand your purchases and the prices. At the end of the month it was all totaled up and you paid your account.

Bread was delivered by Atwells Bakery in horse drawn bakers vans. The van would stop at each house, and a young lad would come in with a HUGE basket of bread on his back haversack style. He would dump the basket on the kitchen table and one would choose the loaves one wanted from the selection he had in the basket.