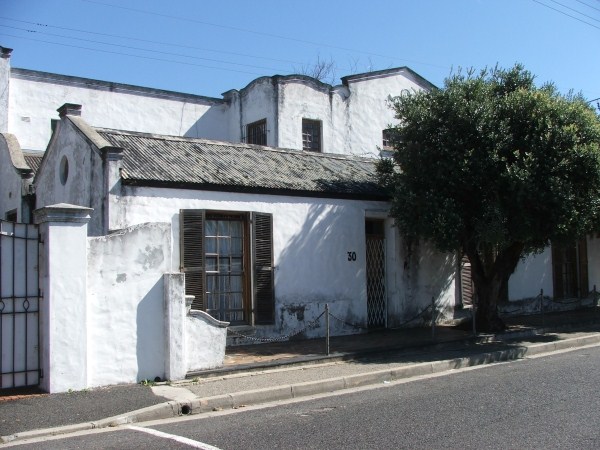 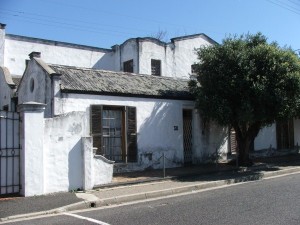 Plumstead was first mentioned when in 1692 a large portion of land beyond Wynberg and Constantia Valley was granted to free burgers Hendrik Jergens and Johan Barrens. They called it “Rust en Werk” – they endeavoured to farm it.

After the decline of the Dutch East India Company, the British occupied the Cape.

1797 battle of Muizenberg. An englishman, Henry Batt, saw possibilities of farming at the Cape of Good Hope and encouraged his son to come out to the country. This Henry did and arrived in 1807 on board the Norfolk House. He bought “Rust en Werk” and named it Plumstead after a district of London. Henry Batt farmed there for twenty-six years.

Extract written in 1939:
“One hundred and seventy years ago, Plumstead, which an enthusiastic writer of the day tells us, was so named by H Batt, its public spirited patron, was a rising village with an air not to be equalled. It is quite a delightful sight to discover the rising cottages in all directions; the writer declares with passionate zeal, the dwellings of free burgers with their plantation and gardens overcoming the hitherto supposed sterility of the soil.”

It must have been an enchantingly pretty little village, so lovely that it made the writer suggest that it might well form a theme of a poem called “Rising Village”. 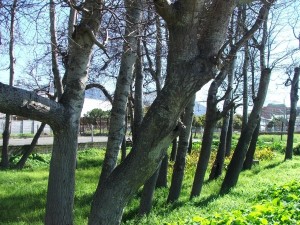 All that remains of Battswood

Batt died in 1833. His tomb is in Batts Road, a continuation of Chudleigh Road – looks as if there is a Moslem influence in the building of the tomb. A coloured training center bares his name.

Plumstead was then subdivided and bought by Higgs, Loubscher and Southey. In 1896, Sir Richard Southey bought it all. He was born in Calmstark, Devonshire (England). He held farming and administrative positions in Grahamstown; and was knighted in 1891. He was interested in cattle farming and was to be seen walking about his farm, Plumstead, always with pine tree seeds in his pocket – he would make a hole with his walking stick and drop a seed in – hence the pine trees in Plumstead today. Many of the streets have Devon names, taken from his home country. He died at his residence ‘Southfields’ – today St Michaels orphanage. He wrote a clause in his will that there were to be no flats below the railway-line. One son built and lived in the house ‘Culmwood’, which in 1833 Timour Hall became the property of Edward George at the time of Batt’s death. In 1881 it was ceded to Aletta Smith widow of Charles James Smith. (Widows were often granted land or farms in lieu of a pension for services rendered to the colony by their husbands). Sir Percy Fitzpatrick lived there. It has now been purchased by the education department.

Anston – in Melville Road, was built in 1814 by Segar – it was named “Waterloo”. After numerous owners, it was bought by Dr Meyer, a skin specialist in 1884 – he named it Meyerhof. It is very old and still has the wide floorboards and old Dutch oven and open fireplaces in the kitchen. The original gate posts are still there.

Main road was a dusty cart track with an avenue of pine trees on one side and a deep donga on the other side.

Eaton Convalescent Home was a wayside inn for coaches before the railway. It was equal to the best inns in England.

Oakhall – Olive Schreiner died there in 1920. Oakhall originally was called Rustic Cottage – once used as a German club.

Hildebrand’s poultry farm – Victoria and De Waal roads – bought by Nicholson – was once a gambling den where parties were held – Plumstead Cemetery is now in the area.

Soil in Palatine and Firfield Roads more fertile – it use to be a vlei.

St Michaels – 1905: started by Seventh Day Adventists as a clinic – bought by Lady Michaels and donated entirely to the provincial administration for an orthopaedic home.

Railway: 1876 to Wynberg and in 1896 to Muizenberg. Electrified in 1929. Original station was wood and iron – it was reduced to ashes one morning – new station built in 1896 – with a recent coat of paint it is still presentable.

1848 – a petition was drawn up against more licenses for canteens in the Wynberg area.

Wynberg was the center of the vine-growing industry at the Cape and a large amount of cheap wine of very inferior quality was produced.

From the Three Cups (today Mowbray) to Plumstead, a distance of 4 miles, there were 14 canteens on the Main Road.

Referenced and quoted from Ancestory 24

The Duckitts
In September 1800, William Duckitt together with a party of sixteen, arrived in Simon’s Bay aboard the Wellesley.  Duckitt had been sent to the Cape “for the purpose of improving the state of local agriculture”.  Not long after his arrival, this capable man had, together with Sebastian and Jacob Van Reenen (well known Constantia land owners), been awarded a contract to supply meat to the troops.
By 1806, Duckitt had become a man of some substance, owning the farm of Newlands.  Under pressure from the governor, he exchanged it for the farms Wittebomen and Baas Harmans Kraal.
The agricultural hall in Darling portrays the history of farming in the area which gained impetus in 1800 when William Duckitt and his family were brought out from Surrey, England to improve local farming methods.
His granddaughter, Hildegonda Duckitt was a cook and hostess of renown who wrote various cookery books and “The Diary of a Cape Housekeeper” in which she describes the activities on the farm for each month of the year.  Her books are highly sought after Africana. 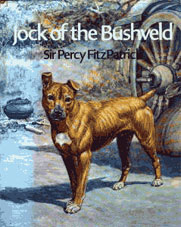 Sir James Percy FitzPatrick
Politician, author and pioneer of the fruit industry, he was the eldest son of James Coleman Fitzpatrick, judge of the supreme court of the Cape Colony, and Jenny Fitzgerald, both from Ireland.
Born in King William’s Town – educated at Downside Abbey (near Bath, England) and later at St. Aidan’s College, Grahamstown – he left college in 1880 to support his mother and her family following his father’s death.
In 1884 he went to the Eastern Transvaal goldfields. His adventures during the pioneering days in the bushveld are vividly described in Jock of the Bushveld, now a South African classic, which has been translated into several different languages, among them Afrikaans, Dutch, French, Xhosa and Zulu.