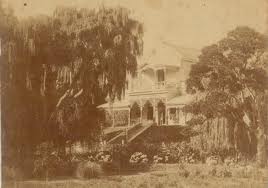 Posted in Neighbourhoods in Focus, Plumstead

“Timour Hall. This is the name given in 1878 by a later owner, Mrs Aletta Jacoba Smith (a granddaughter of William Duckitt), to a property on the banks of the Diep River.  The present impressive homestead is entirely Victorian in appearance with a Cape Dutch gable surmounting a portico which covers part of the elevated stoep reached by an impressive flight of stairs.  The voor- en agterhuis now houses a fine divided staircase, with a bay-window at the back.  The refashionings probably took place during the ownership of Aletta Jacoba Smith.  The house almost certainly incorporates a late 18th century building.  Behind it is an irregularly shaped farmyard bounded by outbuildings, one of which, at right angles to the house, is a fine ballroom.” (The Old Buildings of the Cape: Dr Hans Fransen and Mary Alexander Cook : Jonathan Ball Publishers)

Johan Georg Lochner, born in Mannheim, Germany, came to the Cape in 1765 and worked as a waggoner and tailor before becoming a citizen of the Cape in 1771. In 1794 Lochner was declared bankrupt; and to survive and enable him to provide for his family, he applied to the authorities for land which was granted along the Diep River, in what is today the suburb of Plumstead. He was eventually given the freehold title on 19 October 1804 to 9 morgen 534 square roods 120 square feet.

Following Lochners death in 1806, the land changed hands and size repeatedly and many names begin to appear on deeds. James Coleman Fitzpatrick (father of Percy Fitzpatrick a politician and author of the book Jock of The Bushveld), an Irishman, became a judge of the Cape Supreme Court in 1861, worked in the eastern Cape for a while and was then transferred to the Cape bench in 1869.   In 1873 he bought two portions of land of what would later become Timour Hall Estate.

In 1875, an advertisement was placed by Judge Fitzpatrick in the Cape Argus, offering his property for rent, furnished or unfurnished. A prospective tenant would have enjoyed the following: The residence of the judge with adjoining lands.  The house consisted of parlour, dining and drawing rooms, ten bedrooms, kitchen, pantry, dairy, storeroom, bathrooms and closets as well as coach house, extensive stabling and water. The important aspect of this advertisement is that the property was advertised as Timour Hall the earliest written use of the name.

Shortly thereafter the Judge began selling off portions of the land. Mrs Marianne Edweline Pfeiffer, was the last private owner of the much diminished Timour Hall.   She sold the remaining 5.2 morgen to the Cape Provincial Administration (CPA) in 1960.

The house was declared a National Monument in 1977. Timour Hall is currently leased to the International Police Association who utilise it as a self-catering Guesthouse.